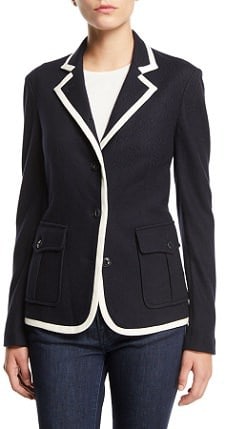 I always like Rag & Bone blazers, including a cashmere one they have that’s been on the bestseller list for a ton of places — I mentioned it in our jardigan roundup because it’s like a cardigan with some structure to it. This one is their Uni wool blazer, and I love the contrast trim, the side flap pockets (which seem really cool), and the fitted shape you get with those three buttons. It’s a great look if you really like neutrals. The blazer is available at Neiman Marcus in the pictured dark blue as well as charcoal gray in sizes 00–12, for $550. Uni Button-Front Wool Blazer

There are a few lower-priced options: in petite and regular and plus sizes.