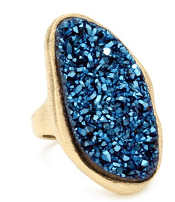 While photographing my own work jewelry collection this past week, I started thinking about some of my favorite pieces that I probably wouldn’t wear to work — and one of them is definitely the druzy ring that my husband got me for my birthday this year. It’s sparkly but subdued, it wasn’t too expensive so I feel comfortable wearing it in a variety of situations, and I always get comments. This large cocktail ring looks even better than mine — it’s $270 at Endless. (Incidentally, Endless will soon be shuttered and become part of Amazon — so I’m hoping for some great closing sales!) Marcia Moran “Midnight” 18k Gold-Plated Dark Blue Druzy Organic Stone Ring, Size 6