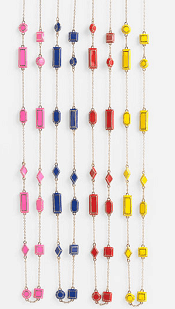 Something on your mind?  Chat about it here.

HAPPY HOLIDAYS, YOU GUYS! In keeping with Corporette tradition the posting will be lighter for the next week or so, but stay tuned for some year-end round-ups of my favorite clothes, suits, accessories, and posts (and feel free to use those as new open threads if you like). For the last Weekend Open Thread of 2012, I am dying for these long necklaces from Kate Spade, which kind of remind me of those long Chanel necklaces I’ve been ogling — but in a more fun, happy, affordable package. Each necklace is $98 at Nordstrom. kate spade new york ‘jewelbar’ long station necklace