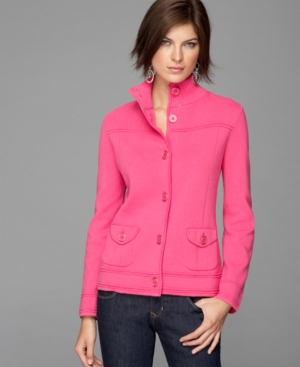 OK, we thought we’d give the coffee cups a rest and try something new for the weekend open thread — a recommendation for weekend/casual clothing. Today we’re liking this cotton sweater from Jones New York, which comes in pink and black. It’s a wee bit too casual for every day at the office (unless your office is already pretty casual), but it’s a great look for running errands around town or just lounging around the house. It’s on sale at Macy’s — now $89, was $119, available in sizes S-XL. Jones New York Signature Sweater, Button Pocket Cardigan

In the meantime — something on your mind? Chat about it here.