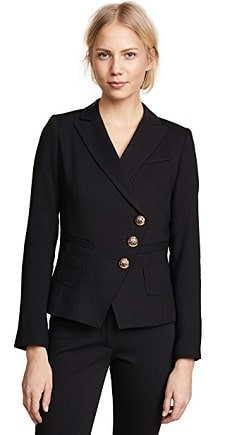 This wrap blazer keeps coming in and out of stock, and I think it’s interesting enough that it’s worth sharing even though all the sizes aren’t available right now. I love the asymmetrical buttons and lapel — and although I’m not really one who likes shiny brass buttons, I kind of do here. Those pockets actually look functional, too, and because this is Smythe, you know the tailoring will be amazing and the fabric will be substantial. I think it’s very chic and I really like the look of it. The blazer is $695 at Shopbop and is also at Saks and Amazon. Wrap Blazer

A couple of lower-priced options are at Neiman Marcus and Shopbop.