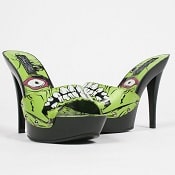 Oooh: I’m loving these zombie growler platform heels for a casual day at the office. Not only do they give you a lot of height (which obviously makes you way more authoritative) but those adorable zombie teeth will be peeking out from beneath your trousers, as if to tell your coworkers, “grrrawr!” They’re $51.99 at Amazon. Zombie Growler Platform Heels in Black by Iron Fist

N.B. Know your office!  Sandals, platforms, and zombies are not appropriate for every office.