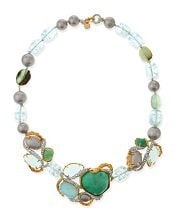 My obsession with Alexis Bittar continues with this necklace, which looks delicate yet statement-y at the same time. The necklace is a bit of a splurge for a lot of plated hardware and non-precious stones, though: $595. Alexis Bittar Maldivian Necklace with Green Stones