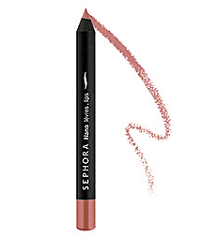 I recently decided to replace my super-old (worn to a nub!) lip liner. So I poked around online, looking for a “nude for me” kind of lip liner. (I should clarify here: unlike some women who use their lip liner as a base for lipstick by filling in their entire lips, and unlike some women who “define” their lips, I mostly just use lip liner to aid me in my super-fast, mirror-less application of lipstick. I find that having lined my lips it keeps the lipstick in the lines, and it also helps to fill the blanks if I somehow miss part of my lip. (Does that make sense?)) Anyway, I poked around and read a bunch of articles, nearly purchasing some of the $20-ish clear lip liners (such as this, this, or this) and eventually just decided to take my chances with a $5 Sephora brand lipliner (which is more inexpensive than most drugstore brands!). And… it’s perfect; exactly what I wanted. Hooray for $5 beauty purchases. Sephora Nano Lip Liner in Native Nude

« The Easiest Ways to Wash Your Work Pants So They Come Out Great (No Ironing!)
Tuesday’s TPS Report: Houndstooth Dress – Printed Ponte Elyse »

« The Easiest Ways to Wash Your Work Pants So They Come Out Great (No Ironing!)
Tuesday’s TPS Report: Houndstooth Dress – Printed Ponte Elyse »
Back to Top