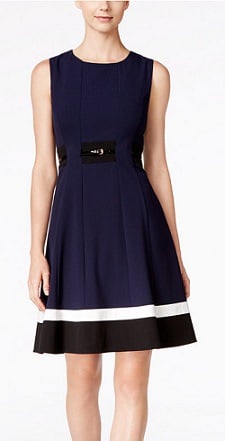 I tend to prefer sleeker fit and flare dresses, and not like frillier, poufier ones — so I’m kind of on the fence on this one. The pro: it’s a best-seller at Macy’s (where it has rave reviews), and is available in regular, petite, and plus sizes — and it’s only $89-$99. I also like the mix of navy/white/black in this dress.  (Amazon has a few colors as low as $48.)  Calvin Klein Colorblocked Belted Fit & Flare Dress