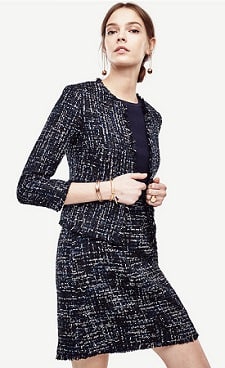 Happy Wednesday! I’m loving this tweed suit from Ann Taylor — it’s got texture and visual interest with that black nubby tweed fabric, but the comfort and versatility of a classic style. There’s a matching skirt and sheath dress, but no pants, alas. The jacket (Refined Tweed Jacket) is $179 in regular and petite sizes, and the skirt (Refined Tweed Skirt) is $89, available in regular, petite, and tall sizes.

Looking for something similar in plus sizes? This $99 blazer has a matching skirt, this pantsuit is selling out fast at Nordstrom but still available at Bloomingdale’s.