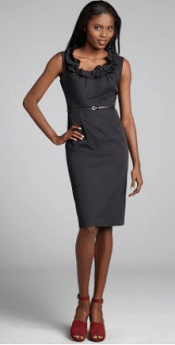 Bluefly has a number of cute dresses on sale, but this simple black cotton dress strikes me as a particularly great deal — it was $348, but is now marked to $89.10. I like the ruffles at the neckline, the scoopneck, the full lining, and the side vents at the back of the skirt. I’m not a huge fan of the belt, but that’s an easy swap — I might go for a brightly colored skinny belt instead. (6pm has the same dress in lilac and a mustardish “Redwood” for $121-$156.) Elie Tahari black cotton blend ruffle trimmed belted ‘Roxanna’ dress

« Sponsored Post: Take Care of Your Vision with DAILIES ® AquaComfort Plus ® Contact Lenses
Previously, on Corporette… »
Back to Top