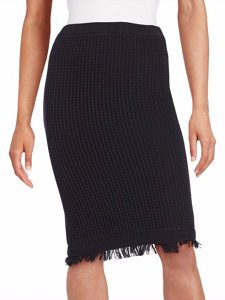 First off, I would not expect this skirt to be bulletproof — I’d expect it to snag and maybe to fit in a very body-conscious way at the beginning of the day. If you’re looking for a $29 skirt that has a bit of fun with fringe like this, though, this is a great one to consider. For static electricity reasons, I would definitely get a plain black slip to wear underneath. (It’s also available in white.) The skirt comes in sizes XS-L and is on sale at Saks Off 5th for $29.99 from $78. Catherine Catherine Malandrino Fringe Knit Midi Skirt