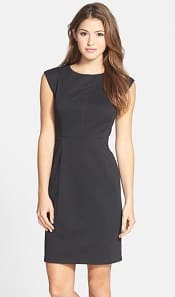 Ladies, I present a unicorn: a machine washable dress that is highly reviewed, comes in multiple colors and size types, and is under $100. I like the flattering pieced construction, the inset waist, jewel neck and cap sleeves. The dress is $98 and comes in regular, petite, and plus sizes. Halogen Ottoman Rib Cap Sleeve Sheath Dress Seen a great piece you?d like to recommend? Please e-mail [email protected] Update: FYI I see that 6pm’s featured sale today is for career separates — lots from Calvin Klein, Anne Klein, Jones New York, Pendleton, and more, all up to 84% off. (!!) They have a pretty good selection for plus sizes and petites as well. (L-all)

« Suit of the Week: Reiss
What to Wear Underneath Unlined Suit Pants »

« Suit of the Week: Reiss
What to Wear Underneath Unlined Suit Pants »
Back to Top