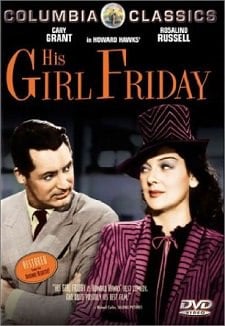 Ladies — did you get a chance to watch the movie His Girl Friday? This is part three in our series on “working girl” movies; you can check out our earlier discussion of the movies 9 to 5 and Working Girl. (You can stream it for free on Amazon Prime if you haven’t.)

I hadn’t seen this movie in a few years, and I was interested to see it again for this discussion — I’m a big fan of Cary Grant (my youngest son’s middle name is Grant because of him) and director Howard Hawks, and while I haven’t seen a ton of Rosalind Russell’s work this movie has made her beloved to me. There are obvious parts of the 1940 movie that don’t translate well to 2016, such as a few intolerant lines, but I still thought it was interesting to watch. Some notes, in no particular order: