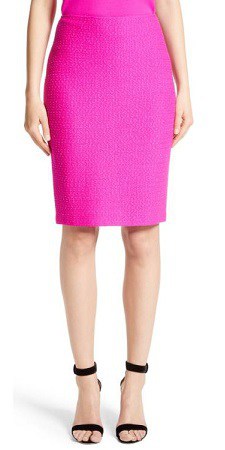 I’m usually kind of iffy on St. John, but I’m now obsessed with all of the bright, happy separates on sale in colors like hot pink, marigold, and medium blue. I featured the hot pink twinset in yesterday’s roundup of what to get for work in the Nordstrom Fall Sale; there is also this hot pink ribbon texture knit skirt, as well as a short-sleeved jacket and dress. Fun! The skirt was $395, but now comes down to $237 on sale. Pictured: Ribbon Texture Knit Skirt

Here’s a more affordable option (in tweed) that comes in regular, petite, and plus sizes at Talbots for $109.