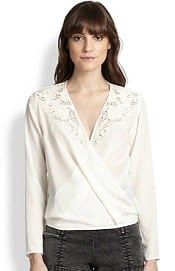 Ooh — I love the embroidery on this silk crossover blouse from The Koooples. The V is a bit low, I’ll grant you, so a camisole is a must — this might be the one situation where I could get behind a nude-for-you camisole rather than a white one (so you don’t “ruin” the lines of the blouse), but that’s me. Lovely. It’s $325 at Saks. The Kooples Silk Broderie Anglaise Crossover Blouse Here’s are three less expensive versions (the latter two also from the Kooples), as well as a plus-sized version. Seen a great piece you’d like to recommend? Please e-mail [email protected] (L-all)