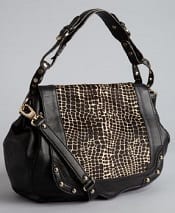 Fun satchel from Rebecca Minkoff — and a pretty decent sale. I like the leopard details, the gold tone hardware, and the general shape of the bag — fun. It was $625, then marked to $499, but today there’s an extra 40% off sale — bringing it down to $293. (It looks like they have the same bag but in lavender, sans leopard details, for $234 also.) Nice. Rebecca Minkoff black calf hair and leather ‘Moonstruck’ saddle bag P.S. And I just noticed Bluefly has a lot of Minkoff wristlets for around $50. Hmmn (says the girl on the prowl for a wristlet). (L-4)

« How to Tell Your Beloved Mentor You’re Quitting
Workwear Hall of Fame: Ponte Knit Sheath Dress »
Back to Top