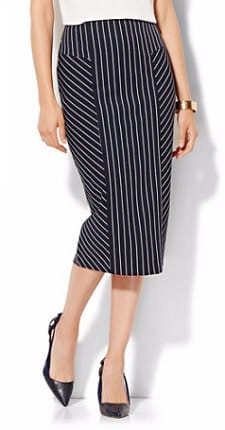 Happy Friday everyone! This striped navy pencil skirt looks like the perfect way to add a touch of pattern and visual texture to an outfit. (There is a matching jacket available, but both pieces together are a bit much for me.) Fun question: what’s your favorite affordable pencil skirt these days? (Readers used to looove the Halogen pencil skirt with welt pockets, but Nordstrom changed the design several years ago.) The pictured skirt comes in sizes 0-18, as well as petite and tall sizes; it’s on sale now for $38.46. 7th Avenue Design Studio Navy Pinstripe Pencil Skirt

This stripey plus-size skirt from Eloquii is similar. Feel like drooling? This $725 skirt is nice.