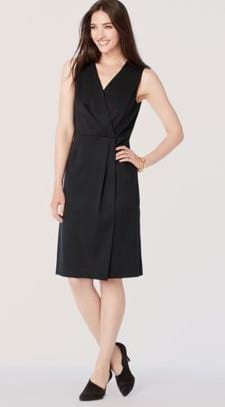 We’re featuring this dress in black, but you can also get it in a very pretty teal called “night sky.” I like the v-neck, and I like the sleeveless style because you can layer it with a blazer or cardigan. I also like the faux wrap and the fact that the fabric resists wrinkles. The sale doesn’t hurt, either! You could make a suit out of this if you wanted — but only in the blue — as there’s a blazer (and skirt) available. Note that the description says dry clean, but not dry clean only. The dress comes in misses, petite, and plus sizes and is on sale for $99 from $199. Pendleton Seasonless Wool Layla Dress