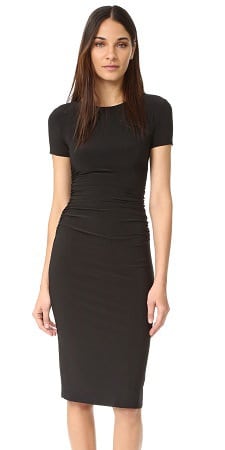 This shirred dress is from KamaliKulture (from Norma Kamali), which has a huge number of dresses that are really popular right now. This one also comes in a black/gray stripe (at 6pm) and has other versions — sleeveless (in black and a print at Amazon, also at Zappos in dark gray and at 6pm in red) and long-sleeved (at Amazon) — and it’s machine washable. When companies produce dresses in so many varieties, it usually means the dress is a winner. It’s described on one of the product pages as being a “slinky jersey” — so if you want a really fitted look, this might be a dress for you. (If memory serves from other KamaliKulture dresses, it’s not a jersey that’s really huggy, though — more of a taut jersey that stretches enough to accommodate your body and then sucks you in a little bit.) If you’re looking for something that’s machine washable and has sleeves and is on the more affordable side, this is a good bet. The pictured version is $74.99 at Amazon (except for medium, which is $125). KamaliKulture Shirred Dress

Two similar dresses in plus sizes that are also machine washable are from Lauren Ralph Lauren and Old Navy.

« Suit of the Week: Boss
Should You Tell Your Colleagues About Your ASD? »

« Suit of the Week: Boss
Should You Tell Your Colleagues About Your ASD? »
Back to Top