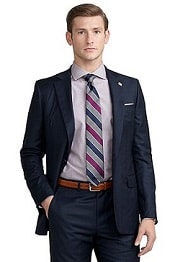 Which blogs provide workwear advice to young male professionals? Reader S wonders, and now is a great time to talk about men’s style since I’m guessing there will be some killer Father’s Day sales coming up… (update: here’s our roundup for some big mens’ sales happening the weekend of 6/14) —

Do you know of any blogs that provide sound fashion advice to young male professionals? One of my firm’s summer clerks has become the subject of office ridicule because of the way he dresses, as well as his general awkwardness. This really bothers me, as he reminds me a lot of my younger brother. In an attempt to help him, I am planning on sending an email to him and to the two female clerks recommending helpful blogs regarding office etiquette, professional clothing, etc. I am going to recommend Corporette to the ladies (you have helped me immensely), but I do not know of a site for men. Are there any that you would recommend?

This is something that I’ve been asked so often that I’ve actually bought a few domain names and thought about launching a workwear blog for men myself. (Trust me when I say it’s at/near the bottom of my to-do list, though!) I’m curious to hear what readers say here — some of my best resources for men include:

Readers, what resources do you recommend for guys just learning how to dress professionally? (Also, I’m kind of curious — what are some of the worst style errors you’ve seen men make at your offices?)