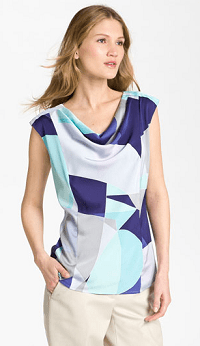 Oooh: gorgeous silk blouse from Classiques Entier Atelier. I love the cowl neck and the darts near the waist, as well as the fact that it’s made of a silk/spandex combo. I might wear it with a light gray or crisp white for the office, or even a nice navy suit. It was $128, but is now $64 at Nordstrom. (It’s also available in plain white.) Classiques Entier Atelier ‘Refined Silk’ Blouse

« Suit of the Week: Tahari Arthur S. Levine
The Case Against Cuffed Pants »

« Suit of the Week: Tahari Arthur S. Levine
The Case Against Cuffed Pants »
Back to Top