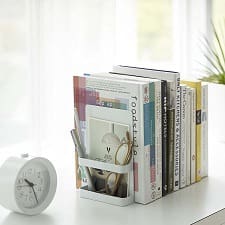 This desk accessory looks great if you’re the kind of person who can never find a pen and who’s always looking for your glasses (or reading glasses or sunglasses), and so on. If this sounds like you, you may want to get a bookend with built-in storage. This cute one from Yamazaki Home is a great way to make use of a small space like a desk or a bookshelf and help contain clutter. It comes in white and black. The brand has a lot of interesting things in general — definitely check it out. The bookend is $20 at Amazon. Yamakazi Home Tower Book End

« What to Wear to Work in the Winter
Tuesday’s Workwear Report: Jane Textured Dress »

« What to Wear to Work in the Winter
Tuesday’s Workwear Report: Jane Textured Dress »