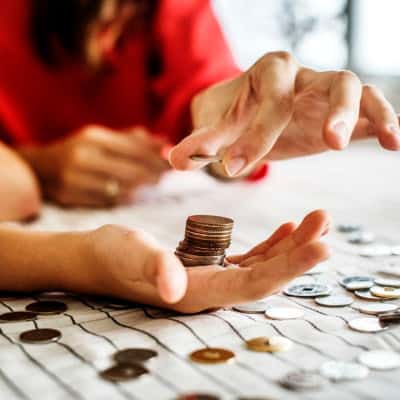 Readers, have you ever considered using 529s for going back to school, either for yourself or a partner? If you’re thinking about getting a law degree or enrolling in another graduate program in the future, you should know the basics of using 529s to fund your education. I’m betting that the typical Corporette reader is more familiar with these tax-advantaged savings plans than the general public — only a third of Americans know what they’re for, which I assume is partly due to their oh-so-creative name — but it’s been quite a while since we’ve discussed them, so it’s time for an update.

(By the way, the 529’s lesser-known name does reveal its purpose: QTP, or “qualified tuition program.”) Here’s our last discussion on tax-savvy investments such as 529s — and also check out our 529 tips for working moms.

One major change since then, which will only apply to you if you have kids or are considering having kids someday, came courtesy of the Tax Cuts and Jobs Act that Congress passed in 2017. Under the new rules, 529 funds can be used not only to pay for college but also for tuition at K–12 public, private, and religious schools. (We’ll get into that later).

Psst: On the subject of grad school, we’ve previously shared tips on how to financially prepare for grad school, as well as how to transition from a lawyer’s salary back to paying tuition and — for when you’re out of school — tips on how to pay off big student loans.

Here are some questions and answers about using 529s for going back to school, including a few tips from Jane Yoo, CEO of Jane Financial, a financial planning firm in Oakland, CA, that serves Gen X women professionals:

What are the tax advantages of opening a 529?

With 529 college savings plans, investment growth and withdrawals aren’t subject to federal taxes. The plans are administered by states, although you can use one from anywhere you choose, and some states offer their own tax benefits when you make contributions. For example, New York residents can deduct up to $5,000 ($10,000 for married couples filing jointly) on state income tax. If you live in Arizona, Arkansas, Kansas, Minnesota, Missouri, Montana, or Pennsylvania, you can still get a state tax deduction if you have a plan from another state. Note: In addition to the 529 option called a college savings plan, you have the option of the less popular 529 prepaid tuition plan, which both states and educational institutions can offer. (Only states can offer college savings plans.)

You can use funds from a 529 to attend a college or university or to enroll in post-secondary training — options include graduate schools, community colleges, trade schools, qualified online degree programs, and even many schools outside the U.S. (Here’s a searchable database.) As mentioned above, 529s can also fund tuition at private elementary and secondary schools, up to $10,000 per beneficiary per year.

If you’ve decided to go to grad school yourself, the answer is “now.” Regarding a child’s college education, says Yoo, “It’s never too late to get started.” She adds, “I have many friends and clients who worry that they’re supposed to start saving as soon as the child is born. I generally recommend selecting the age-based option that invests the contributions in a mix of stock and bond mutual funds that gradually become more conservatively allocated (e.g., more bonds than stocks) as the child approaches age 18. I like 529 plans that use low-cost, broadly-diversified investments from Vanguard or iShares; the Utah, Arkansas, and Virginia 529 plans are good places to start your research.”

The IRS doesn’t set a specific limit for 529 contributions, but the money can’t exceed the beneficiary’s expected qualified education expenses. States have their own maximums; for example, New York allows up to $520,000 in contributors for a single beneficiary. If you’re lucky enough to have someone lending a hand as you save for your education (or your child’s), here’s what you should know: The gift tax exclusion for 2018 is $15,000 per beneficiary (increased from $14,000 for 2017), but that max can go up to $75,000 when a single year’s contribution is treated as being made over five years — that’s called “superfunding.” (For a couple who is married and filing jointly and wants to avoid the gift tax, those numbers become $30,000 and $150,000.)

When can you withdraw the funds?

A 529 isn’t like an IRA — you won’t pay a penalty for withdrawing your money “early,” as long as you put it toward qualified education expenses. However, you need to use funds from a 529 in the same calendar year in which they’re withdrawn. There’s no set deadline to take the money out, either, which is helpful if you decide not to go back to school and are planning on having kids. (See below.)

Can you use the funds for anything else, such as a down payment on a home?

No. If you withdraw money from a 529 for anything other than qualified educational expenses, you’ll have to pay state and federal income tax and an additional 10% federal tax penalty on your earnings.

Can a 529 plan be transferred to someone else?

When you open a 529, you can designate anyone as beneficiary — including yourself, of course. Within a family, you can change a plan’s beneficiary or roll over funds distributed from a 529 plan without tax penalty. For example, if you’ve been saving money in a 529 for grad school and at some point your plans change, you can simply change the beneficiary to your child.

Should I be worried about putting too much money in a 529?

If you’re considering a 529 for yourself, or especially for your child (or a future child), here is Yoo’s advice on what she said is the most common misconception about these plans — that you’ll “lock up” your money:

[Some clients are] concerned about over-funding the 529 plan; perhaps the child will receive a scholarship, or go to a lower-cost state university. If you are fortunate to have saved more than needed in the 529 plan, you have a few options. You could transfer the balance to another family member (e.g., the child’s sibling if applicable, niece/nephew, or even to yourself if you plan on obtaining a graduate degree). Or you can simply withdraw the unused balance, and (1) pay a 10% penalty on the earnings (not the original contribution) for using the funds for non-qualified education expenses, and (2) pay income taxes on the earnings.

Be sure to track your contributions over the years so that you can bifurcate the balance into contributions vs. earnings (e.g. growth) on those contributions. Note that if you withdraw the unused balance because your child received a scholarship, the 10% penalty on the earnings is waived, but you still would have to pay income taxes on the earnings.

Are you considering using 529s to go back to school? Have you used a 529 to fund your own education before (or your partner’s)? If so, how did you choose the plan? 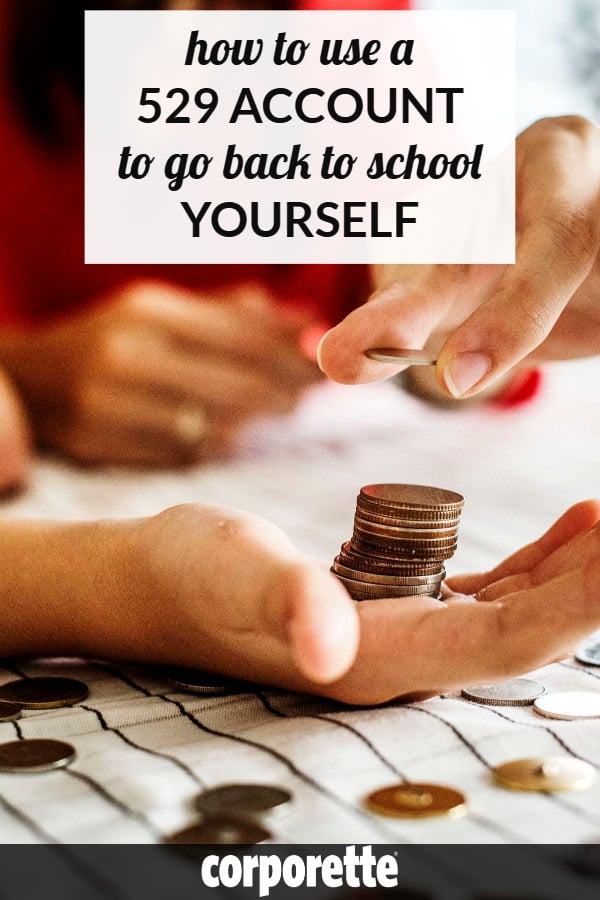 Editor of Corporette since 2014, Kate Antoniades lives in her hometown of Rochester, NY. A cat person and Oxford comma loyalist, she enjoys Ben & Jerry’s Phish Food, superhero movies/TV shows, and photography. One of her prized possessions is her Hello Kitty Converse.