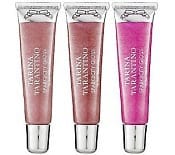 There are almost 400 comments in the first thread and it’s only 12:30 on Saturday!  So I thought I’d open a new thread.  This time I’m recommending this gorgeous lip gloss that I got, which is my current favorite product from a Sephora gift set that was full of great things, sadly now sold out.  How much do I like it?  I emailed Auntie M about it, unprompted, to recommend to her (one of our favorite things to do is always to go to Sephora or Barney’s and play Makeup).  It’s this sparkly gloss that a) doesn’t feel sticky, b) stays really well (and doesn’t put sparkles all over your face the way some other sparkly glosses do) and c) is SUPER sparkly — the sheer, sheer pink (“Paiette”) is perfect because it makes your lips look nude but really shiny.  It’s so subtle my husband even asked once if I was wearing makeup at all when I had it on — he couldn’t figure out what was different.  (In fact, here’s a pic of it on my lips — you can’t even see the sparkles in it up close.) It does transfer a little bit when you kiss, but it’s pretty low compared to other lipglosses.  To me this is the perfect nude gloss to complement a really smoky eye for a night out.  The gloss is $14 at Sephora. TARINA TARANTINO Sparklicity Gloss