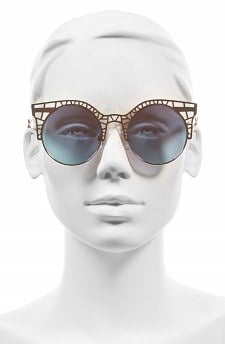 You know, a few years ago when I got my Pucci sunglasses, I said to myself, that’s IT, I will never need another pair of sunglasses because I love this pair so very, very much. And I still love them — but they haven’t quite been the category killer I thought they would be, because I’m still buying sunglasses.  In general I’m not one of those people who spends $100s on sunglasses, although many people certainly do. Instead, I’ve been eyeing the brand Quay for affordable, fun, on-trend sunglasses — everything just seems really cool. I’m currently crushing on these  round sunglasses with cutout metal frames; they are, as Tim Gunn would say, “a lot of look,” but if the rest of your wardrobe tends to be pretty low key, sunglasses are a great place to make an impact. These are $60 at Nordstrom; ShopBop and Amazon also carries the brand. (If even that is too rich for your blood, I got these slightly wacky $10 sunglasses at Amazon a while ago on a total whim and keep getting compliments!) Pictured: Fleur 49mm Round Sunglasses

Psst: Did you know the Nordstrom Anniversary Sale of 2017 is coming soon? Check out our guide if you’re new to the wonder that is the NAS.