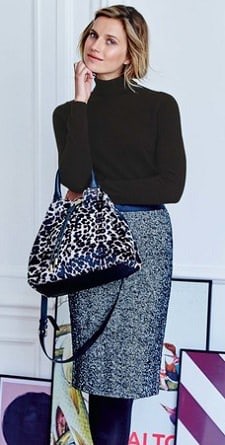 All the pattern options for this pencil skirt are really gorgeous, and many sizes are sold out (except not in the color pictured), which I always take as a sign of a well fitting piece. As always with Boden it’s nice to see that the size range goes up to size 16, although tall and petites are not an option here, unfortunately. This just looks like a great skirt (which the positive reviews also suggest) — and here’s the matching coat. (Note that they’re both dry clean only.) The skirt is $138 at Boden. Freya Pencil Skirt

Here’s a similar skirt in petite and plus sizes from Talbots.