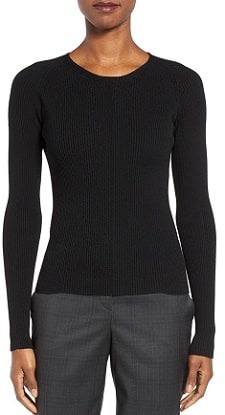 If you’re on the hunt for a close-fitting black sweater for work, do consider this viscose/poly one on sale (new markdown!) from Nordstrom. Cashmere and silk sweaters can be great for warmth, but if you’re tired of pilling and fuzzing, there’s a lot to be said for viscose/poly — and considering this one is marked from $285 to $171 (all sizes left!), this is a great basic to add to your wardrobe. BOSS Fahdi Ribbed Raglan Sleeve Sweater

Looking for a similar version in plus sizes? I like this sweater by Sejour.

« Splurge Monday’s Workwear Report: Pamona Blazer
Resolutions for 2017 – What Are Yours? »

« Splurge Monday’s Workwear Report: Pamona Blazer
Resolutions for 2017 – What Are Yours? »
Back to Top