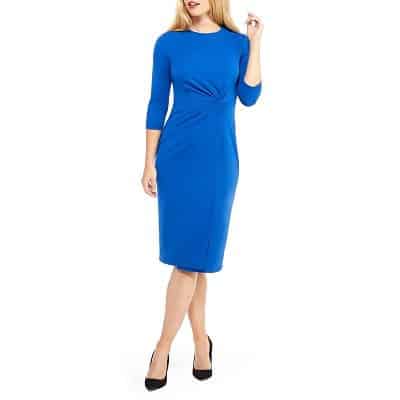 This really lovely sheath dress is from Maggy London, and I love this azure blue color. It’s already selling out in some sizes in its size range of 0–18, both in this blue and in the navy. The plus-size version comes in navy only and goes up to size 24W. This looks like a great dress to go from desk to dinner, and it’s machine washable, too. The dress is lined and has a hidden back zip, as well. It’s $138 at Nordstrom — a nice price. Knot Detail Sheath Dress

« Coffee Break: Black Tea with Chocolate
Which Clothing Tags Do You Remove? »

« Coffee Break: Black Tea with Chocolate
Which Clothing Tags Do You Remove? »
Back to Top