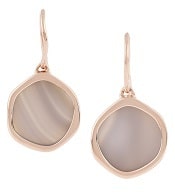 I’m not a huge fan of dangle earrings for the office, but I think these would be ok — they’re a muted color that would, I’d guess, flatter many skin tones, and I don’t think they’re going to distract at all when/if they move. Love the slight organic feel to the design, the rose gold, and the agate. They’re $205 at Net-a-Porter. Monica Vinader Atlantis Kandy Agate Earrings (L-2)

« The Best Height for Interview Heels (aka, Can You Interview in 4″ Heels?)
Wednesday’s TPS Report: Bondage Dress »

« The Best Height for Interview Heels (aka, Can You Interview in 4″ Heels?)
Wednesday’s TPS Report: Bondage Dress »
Back to Top