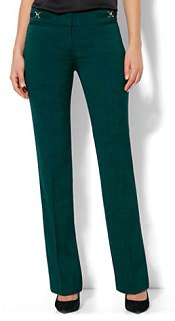 I haven’t seen a deep teal pant this season, so I like this pair from New York & Company. I tend to wear a lot of neutrals (ok, fine, I wear a lot of black), so a fun way to infuse color that lets me keep my black cashmere sweaters is always a positive. The fact that the pants are $26 marked down from $52, and available in sizes 0-18, is even better. New York & Company Crosby Street Straight Leg Pant