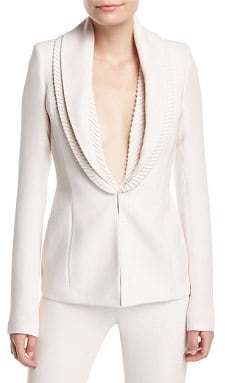 This jacket from Brandon Maxwell looks stunning, and I love the ribbed collar with its layers and shawl collar style. As styled here, it’s hard to imagine it with a blouse underneath, but I would say go very simple, either with a scoopneck t-shirt, etc., or a turtleneck. Even though it’s a beigey, off white crepe, I would pair it with a crisp white and wear it at this time of year. The jacket is $2,195 at Neiman Marcus and comes in sizes 2–10. Ribbed-Collar Crepe Suiting Jacket

More affordable options are from Vince Camuto and Eileen Fisher (straight sizes) and Talbots (plus sizes).