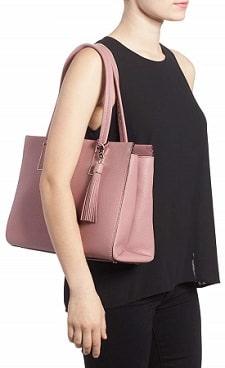 Reader A has a great question about dressing better than her boss — specifically, she wonders, must she carry a lower-end bag than what her boss carries, or would a work-appropriate designer bag be OK? Here’s her question:

I know the blog has discussed before if it’s appropriate for younger folks to have designer items in the office. Mine is similar… basically, do I have to stick to brands below what my boss has? It’s an ad agency. I’m in management, she’s VP. She makes double what I do. She carries a Kate Spade tote and lower-end Coach purse and acts ashamed of spending so much if anyone compliments her bags. Does that make it inappropriate or unwise for me to carry similar?

This reminds me of one of our earliest posts that kind of went viral: the intern who wanted to carry a Birkin bag. I still agree with my advice back then that if you carry a bag that starts at $8000 (and according to Bonkers Closets they go up to $300K) that it’s sending the wrong signal at the office, particularly if the main reason you’re carrying it is as a status symbol. (We’ve also discussed when “must” you carry a designer bag to work — and how to deal when your offensive client uses your designer bag to “joke” that he’s paying you too much. Ah yes, and how to deal when your boss tells you dress too well.)

Back to Reader A: Kate Spade and lower end Coach are in different ballparks than a Birkin. (In fact, I put them in tier 2 and 3 of our last discussion on how to upgrade your handbag collection.) When you’re starting to build your working wardrobe I think it’s a great idea to spend a bit of money on a bag that’s going to be durable and is exactly what you want. I think it’s a bad idea to purposely buy a cheap bag just so you don’t upstage your boss — you’ll need a new one in a few months, to say nothing of the ethical considerations of buying fast fashion. Don’t go into debt for a bag — and know your office (a diamond-encrusted Birkin is probably not appropriate for any office), but in general: buy what you want and don’t worry about it. If your boss specifically asks about it, you may want to brush it off with a comment like “thanks, I’d been saving for it for a while!” or “it was a killer sale!” — but even that is unnecessary.

Readers, what are your thoughts on designer bags and younger workers — what do you think of as work-appropriate designer bags? Would you advise someone against dressing better than your boss? 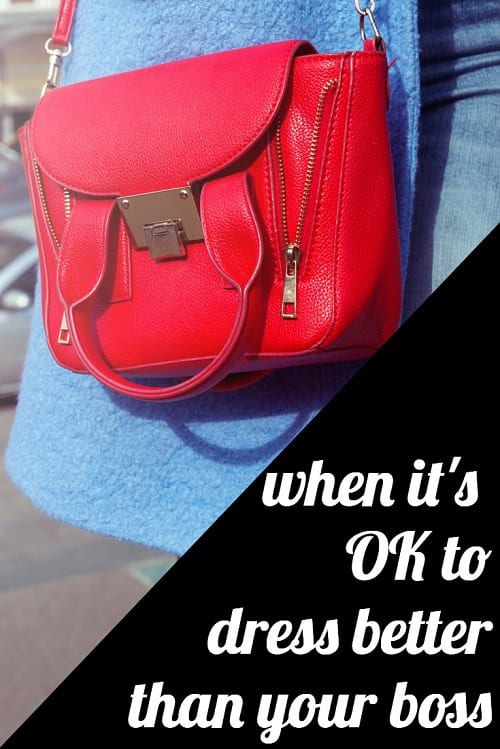