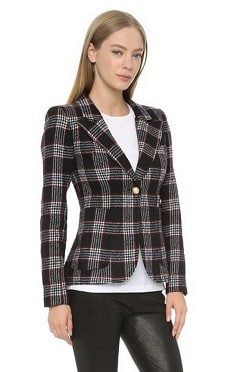 A lot of places have plaid blazers for fall — and I do mean VERY plaid. Some of them are subtle; some are loud; some are trendy in other ways. (Also: huh.) In any event: I love this black, white and red blazer from Smythe the very best — it isn’t too crazy, outdoorsy, or 70s-ish; it’s a printed take on their popular Duchess blazer (minus the odd cutout at the back of the blazer), and I like the details like the leather elbow pads. The blazer is $695 at ShopBop. Smythe Plaid Duchess Blazer