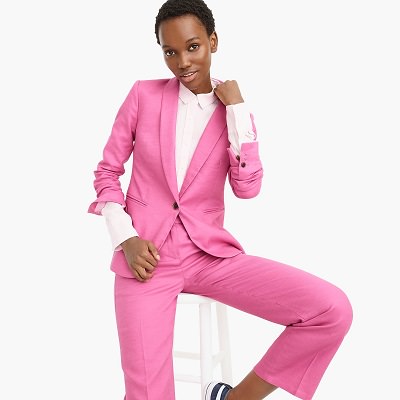 Linen season is almost upon us, and J.Crew has this super cute stretch linen option in several colors, including white, black, beige, and this lovely pink. (There are also some animal print options but I don’t believe those are available in stretch linen.) The pants are wide crops and (depending on color) come in regular, petite, and tall sizes, with some colors available up to size 24. This is the kind of suit that looks like a great suit for a creative office, and the pieces break down into really versatile work separates. The blazer is $178 and the pants are $89.50, but take 40% off your purchase today only with code POPUP. (Oooh, Nordstrom has the suit too and they just marked the blazer down to $100.)