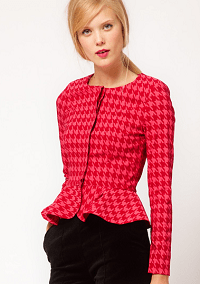 Something about this colorful houndstooth jacket from ASOS makes me so happy. I love the red and pink combo, the fitted bodice, the peplum. I’d wear this with a simple pencil skirt, maybe accessorized with a long necklace or a simple brooch on the shoulder. It’s $85.15 at ASOS. ASOS Peplum Jacket In Houndstooth

« Suit of the Week: DSquared2
Guest Post: Rush Hour Doesn’t Have to Suck »

« Suit of the Week: DSquared2
Guest Post: Rush Hour Doesn’t Have to Suck »
Back to Top