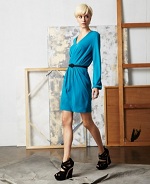 The doo.ri for Impulse collection is available now at Macy’s, and I must say there are a lot of cute dresses. So many, in fact, that it was hard to pick which to feature! I think this blue dress is my favorite, though — something about the way the sleeves pool at the cuffs, and the way the pleating is just so at the front bodice. It’s $75 at Macy’s. doo.ri for Impulse Dress, V Neck Long Sleeve Pleated A Line

« Suit of the Week: Rachel Zoe
How to Decorate Your First Real Apartment »

« Suit of the Week: Rachel Zoe
How to Decorate Your First Real Apartment »
Back to Top