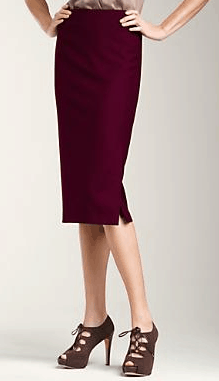 Oooh: Classic. Great ladylike length, nice discreet side slit, and made of a comfy wool/spandex flannel? Sign me up. The skirt is $129 at Talbots, available in Baccara Rose (pictured), sand, brown, black, and gray. Luxe flannel pencil skirt Seen a great piece you’d like to recommend? Please e-mail [email protected] with “TPS” in the subject line. (L-0)

« Coffee Break – Bamboo Small Pave Hoop Earrings
Tales from the Wallet: The Easy Way to Save $10k »
Back to Top