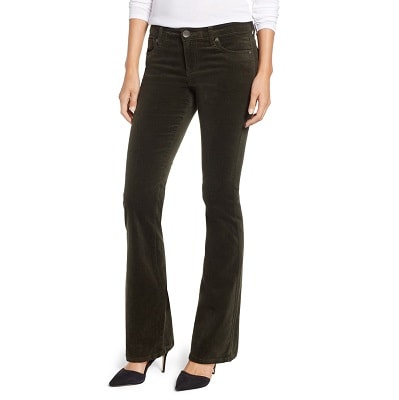 Now is a great time to find a ton of cords on sale, such as these hiiiiighly rated corduroys from Kut from the Cloth, which are now down to $34. Let’s discuss, ladies — what do you wear for winter weekends? I still like skinnier cords since they pair better with my Sorels and rainboots, but I do like the look of bootcuts, which are coming back in. (Along the skinny/leggings line of things, I just got these Heattech leggings-pants from Uniqlo, both of which are in the rotation now…) The straight/wide cropped leg is another growing look (like this pair or this pair), but to me it looks too drafty for winter — what say you? The pictured cords were $69, but are now marked to $34; they come in at least six different colors in regular sizes 0-18. Baby Bootcut Corduroy Jeans