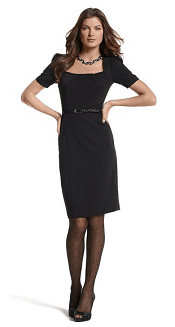 If you’re building a wardrobe right now, there are so many great basics around on deep sale, including this black sheath dress in a seasonless wool from White House | Black Market. I like the sleeves, the “gently folded neckline and angular seams,” and — surprise! — it’s fully lined in a leopard-print charmeuse, which I find delightful. (But then I’m on the team for both animal prints as well as wacky linings, so maybe that’s just me.) Amazingly, despite 62 positive reviews (and a score of 4.6 out of 5), the dress is not only still available in sizes 00-16, but it’s marked way down: was $150, now $59.99. Nice. Seasonless Black Sheath Dress

« Suit of the Week: Talbots
Can A Water Bottle Be Unprofessional? »

« Suit of the Week: Talbots
Can A Water Bottle Be Unprofessional? »
Back to Top