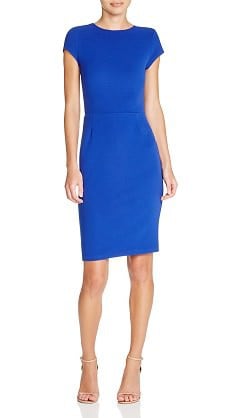 This well-reviewed dress comes in a zillion different colors and prints over at Bloomingdale’s, and this sliiiight ottoman stripe looks nice to me. It’s available in cobalt, black stripe, plaid, and plain black ponte — note also this fancier chevron knit version that is one of Bloomingdale’s bestsellers. (Note that a “body con” dress can be hit or miss for work, but a sure way to have a “miss” is to buy one that looks like it’s painted on — so size up if you need to!) The dresses are $70-$88 at Bloomingdale’s. Aqua Ottoman Stripe Bodycon Dress