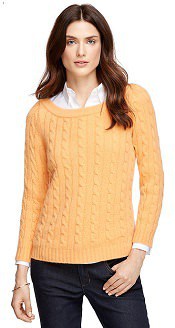 Our daily TPS reports suggest one piece of work-appropriate attire in a range of prices. We just rounded up a ton of cashmere sweaters — many of them on great discounts. This sweater is not on any sort of discount, but I’m posting it anyway for two reasons. First, I love that happy bright ORANGE — how rare is that? Secondly, I like the styling of the boatneck-with-crisp-button-front. It’s a hard look to pull off, but it’s confident, cool, and professional. This sweater is $398 (also available in khaki, yawn). Brooks Brothers Cashmere Cable Boatneck Sweater Here’s a lower-priced option and a plus-size alternative. Seen a great piece youd like to recommend? Please e-mail [email protected] (L-4)

« Coffee Break: Bethe Rope Necklace
The Best Workwear Brands for Hips (Or Other Body Shapes) »
Back to Top