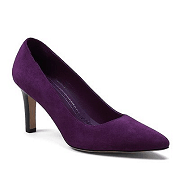 I normally don’t like to post shoes in lucky sizes, but for purple suede pumps marked 75% off, I’ll break that little rule. I love the deep plum color of these gorgeous shoes, and I think it’s a good sign that numerous commenters asked that Brooks Brothers be added to today’s poll on the top brands for comfortable heels. They were $198, but are now marked to $39.60. Brooks Brothers Suede Classic Pumps (L-2)