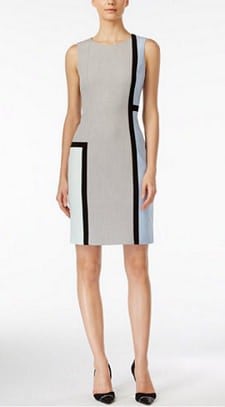 This $89 colorblocked sheath dress caught my eye when we were rounding up basic work dresses the other day, and I like it — there’s a cool, calm vibe to the dress. Contrast that with these two bright yellow sheath dresses (both of which I like very much also, and think would look fab with a gray blazer or long gray cardigan), and even I have to admit, the pictured dress has more of a “the grown-up in charge has arrived” look to it. It’s $134, but using the 15%-off code SAVE brings it down to $114. Calvin Klein Sleeveless Colorblocked Sheath Dress

« Suit of the Week: The Row
Crying at Work: How to Deal »

« Suit of the Week: The Row
Crying at Work: How to Deal »
Back to Top