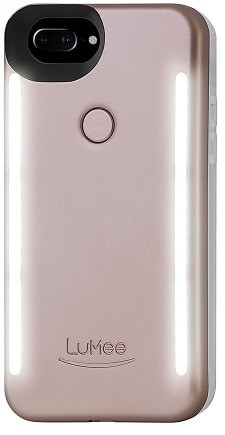 I remember reading a few years ago that the reason Kim Kardashian always looks so great in her selfies is because she has a special iPhone case that provides a soft, happy light. Well, ladies, as holiday season approaches, I think it’s fair to say we’ve all got some selfies ahead of us — as well as group photos and more. So clearly we’re doing the world a service if we get one of these cases for our own phones, right? The fact that Amazon has some for $28-$70 (the rose gold pictured is $36… and kind of in my cart) is hard to pass up. Nordstrom, Target, Neiman Marcus, and a slew of other stores have more options for LuMee cases, including for the Samsung Galaxy. (Note that there are apparently two models: the LuMee Two only has front-lighting for selfies, while the LuMee Duo has front and back lighting. Not confusing at allllll.) Pictured: LuMee Duo for iPhone 8 Plus/7 Plus/6s Plus/6 Plus, The Original and Authentic Patent Protected Selfie Case