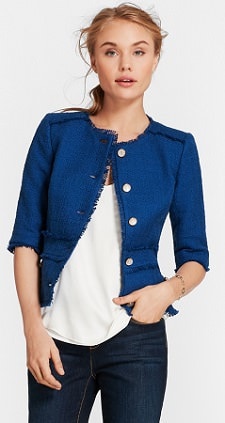 This shrunken tweedy jacket from Red Fleece looks fabulous — even with the minor hesitation that elbow sleeves can feel hard to style. I like the saturated color, the fringe details at the waist, shoulder, and sleeves, and yes, I even like the buttons, which feel slightly military-inspired, which is definitely a trend going on. (There is a matching miniskirt. Sigh.) I like it as styled here, where the volume comes from the loose, untucked tank top but the ankle pants are still skinny — but another option would be to wear the blazer with something higher volume on the bottom, like a flared, swingy dress or some wide trousers (or, ooh, high-waisted trousers, which then solves the conundrum of whether to tuck or not). The blazer is $198 at Brooks Brothers, available in sizes 0-14. Cotton Boucle Elbow-Sleeve Jacket

« Coffee Break: Done App
The Hunt: Pencil Skirts for Work »
Back to Top