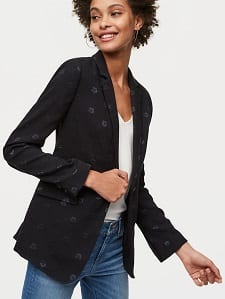 This blazer from Loft is really interesting — I don’t think I’ve seen this sort of jacquard pattern on an otherwise matte blazer. It would be great for holiday parties or just for an unusual blazer to wear around the office. (Note that there are matching pants if you really want to go all out, although I don’t know how advisable that would be.) It’s machine washable, too, which is always good. The blazer comes in regular and petite sizes 00–18 and is $128. You can get free shipping and 50% off right now with code VERYMERRY. Floral Jacquard Blazer