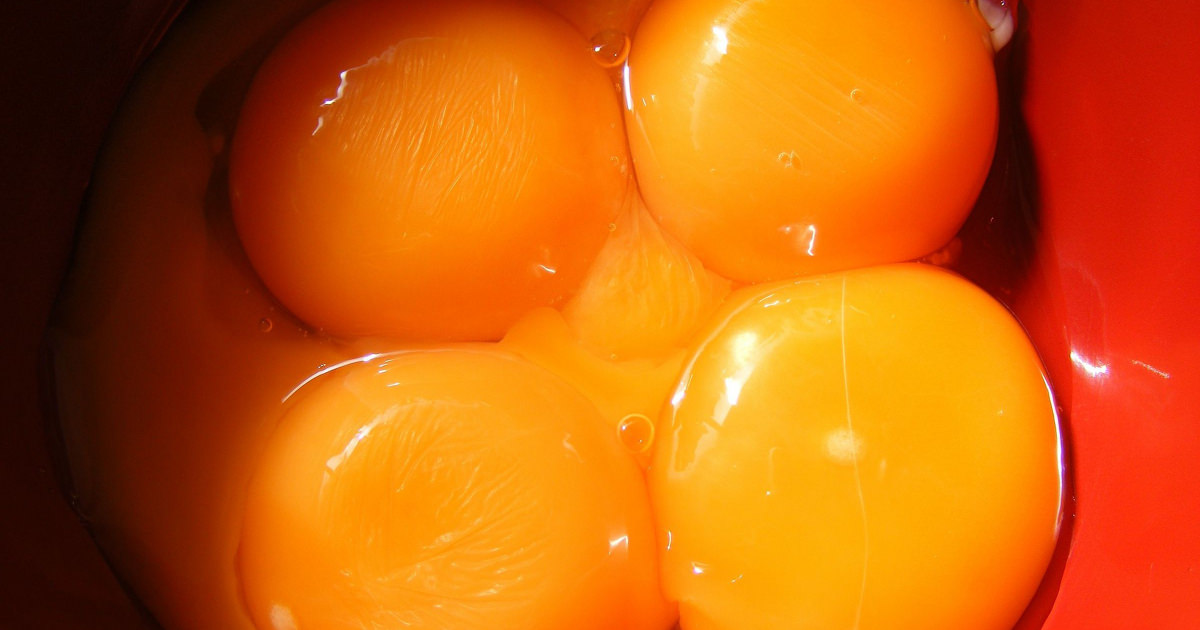 Ever considered freezing your eggs, either because you wanted to postpone kids for your career or because the right partner seems to be in hiding?  One of my best friends, “Auntie M.,”  just went through the procedure, and I asked her to blog about it for Corporette. (Pictured: B0008308 Xenopus laevis oocytes, originally uploaded to Flickr from wellcome images.)

I recently completed the process of freezing my eggs. The process was surprising in many ways, and although I was sure I wanted to do it, I could have used a primer, or even some advice from a friend who had gone through it (none of mine had). Here’s my story.

I turned 34 this year. Early in the year, I had made the decision to freeze my eggs, probably sometime in the next year. I hadn’t decided on when. Then, in late September, I pretty much woke up one morning and it came to me: “Yep, AUNTIE M. Now’s the time to do that.”

I was lucky, because it all happened very quickly. Timing is very important – you’ll start the process on the second day of your period, and by coincidence I was getting my period the week I called the doctor. So I was pretty much off and running. This meant I didn’t have too much time to second-guess myself (a good thing), but it also meant the process was a little overwhelming at times. I think I would have found the following information the most helpful:

A Primer for Freezing Your Eggs

Skip your OB/GYN; instead, go to a clinic you trust: I originally called my OBGYN for this, but then was referred by a trusted source to a nearby-to-me clinic. I live in a Big City, and the clinic was definitely in Posh Neighborhood, and the referral source Definitely Knew What She Was Talking About, so I decided to just go for it. If you don’t have similar resources, I recommend doing some research on different clinics near you, and then go with your gut.

Timing is everything: The clinic will want to take your first blood test and do your first ultrasound on the second day of your period. I had no idea about this when I called my clinic, and it was my pure dumb luck that I was supposed to get my period that week. The doctor will want to take your blood and have your first ultrasound on the second day of your period. (You might be asking yourself, as I did, You’re going to put WHAT and WHERE during my period? Yes. The ultrasound does happen during your period. The fact that you have your period should not surprise the ultrasound tech, so try not to worry about it. But yes, it was a little weird for me.) If you’re on birth control, as I was, you may not be able to start the process right away, depending on the results of your blood test. Fortunately for me, my tests showed that I was a good candidate despite having been on the Pill for years.

Plan ahead: My first appointment was supposed to be 1.5 hours. It ended up being three. Give yourself plenty of time for that initial appointment, and expect to meet with your doctor to discuss your options and the process. You should also meet with the nurse to go over how to administer your daily hormone injections (more on that below). Also expect to meet with the financial/billing department to discuss payment options. All this, in addition to having your blood drawn and ultrasound – it can add up to quite a morning.

Stay available: You won’t get an exact schedule ahead of time as to when your procedure is, when you’ll need to come in for blood tests, etc. This is because it all depends on how your body is responding to the hormones. After the initial appointment, I went in for a blood test and ultra sound every 2-3 days, and then every other day, and finally in the days leading up to the procedure, every day. My clinic was open at 7:00 every day (including weekends, with limited hours), so I would go in early before work and it didn’t affect my work schedule. It did, however, affect my social schedule, as I had long-standing plans to be out of town over the weekend, which unfortunately had to change because the doctor wanted me to come in for tests/ultrasound on both weekend days.

This goes for the procedure as well, which is unfortunate for those of us who live and die by our calendars and love to schedule things. My doctor decided the procedure date only about 2 days before the actual day. Despite my best efforts (we had tentatively planned for the procedure on a Saturday), I ended up having to take a few sick days, after all.

Be prepared to stab yourself: When I made the decision to do it, I knew I would have to take hormones. For some reason, I naively thought these came in pill form, that I could just take the hormones with a glass of water. Ha! No, instead I would be injecting myself with 2-3 different hormones, at the same time every night, pretty much up until the procedure.

Don’t fear the bloat. Or the soreness. Or the tiredness: The hormones will affect you before the procedure. I was bloated and tired, a lot. I was even more bloated and uncomfortable after the procedure. The good news is it’s temporary, and it all resolved over the course of a week.

Plan on not exercising, lifting, twisting: Prior to the procedure, when you’re giving yourself hormones, you shouldn’t be doing any heavy exercise, even light jogging. I pretty much limited myself to walking my dog. No yoga, no elliptical, no weights. As you can probably guess, straining your insides puts the growing eggs at risk of detaching and not being available for extraction. Again, it’s only temporary, so hang in there.

No sex: For pretty much the same reasons as not exercising. Keep your little oocytes safe!

Embryos vs Eggs: Deciding Which to Freeze

Think about freezing embryos: Ooof. This was kind of a doozy. Let me back up: in our first appointment, the doctor told me that frozen embryos are more viable children than frozen eggs alone. I hadn’t actually thought of freezing embryos, and my reaction to his suggestion surprised me. Although I have never believed that life starts at conception/fertilization (and still don’t), the thought of creating embryos, freezing them, and then possibly not using them, gave me pause. It just felt more personal, somehow, and like somehow it created the obligation for me to use all of them.

However, I thought it over, and made the decision to half and half: freeze some eggs, and freeze some embryos. This meant that I would need to choose a donor. While I have a good number of male friends, I didn’t want any of them to be the donor, for various reasons. My doctor recommended a great clinic they often work with, and I went through the process of looking for a donor pretty quickly (all the donor information was online). This was a very interesting process: at times, I would think it was great – I could choose a donor of a certain height, weight, eye color, and, most importantly, I could see their family’s medical history. Dad had a history of alcoholism? No thanks! On to the next. Then, of course, at other times I felt sad, lonely, depressed, desperate, and worried that I was destined to be an old pathetic spinster who couldn’t find a man to love her.

As it happened, I did not have enough eggs to do half and half, so I just froze my eggs alone. I’m still considering freezing embryos in a few months, because I think that would be the right decision for me. I do want to have children (ideally, one biological and one adoptive). On the whole, I am comfortable with donating unused embryos to research. But this is a very personal decision, and you should do only what you are comfortable doing.

When it’s time for the procedure, have someone there to support you: This was a tough one for me, as I pride myself on being an Independent Woman who subscribes to the “You Pack It, You Carry It” philosophy of self-reliance. I was totally prepared to take a taxi to and from the procedure, and would have been fine with that (ok, let’s be honest, I would have been really proud of myself for being tough enough to do that). But when I told my parents about my decision, my mom insisted on being there for me, and that’s exactly what happened. She came into town a few days ahead of the scheduled procedure and drove me to and from, when it actually happened. She made me tea and soup when I got home, and got a heating pad for my belly to soothe the cramps and bloating.

The procedure itself: You will be under a light, but general, anesthesia. Here’s my memory of the procedure: I was on the gurney, they administered the anesthesia, the doctor came in, we said hello, I said that my hand felt cold where they inserted the needle, several voices said “that’s normal,” and the next thing I know I’m waking up in recovery. The procedure was done vaginally, I believe using an ultrasound probe with some special extraction tools attached. It took about 45 minutes, and then I spent about 1 hour in recovery. I was in some discomfort immediately after the procedure, mostly when I laughed at my mom’s funny jokes and observations. But overall it was pretty minor stuff.

Some General Thoughts on Freezing My Eggs

At first I was frustrated by the unpredictable nature of the process, but then reminded myself it was only a matter of 3 weeks to one month – this whole thing is temporary. More importantly, to me, was to remind myself that this was voluntary, and that I was choosing to do this. This put me in a very different emotional headspace than other women who undergo similar treatment because they are having difficulty conceiving. Remembering why I was there, and that it was voluntary, went a long way toward helping me relax throughout the whole thing.

I am, without a doubt, so glad that I made the decision to freeze my eggs. Yes, my biological clock is still ticking, but it feels a little less loud now. I have some space to breathe – I don’t need to find someone who wants to rush into having kids just because I’m running out of time. This doesn’t mean that I’m going to have (yet another) years-long relationship without any concrete direction; I am 34, and I do want to get married and have kids. At this age I feel better about knowing what I want and more confident in letting go of what I don’t in terms of relationships. Freezing my eggs is not something I advertise on first (or even second, or third) dates – it’s just something I know about myself, and something I’m very glad I did.

Readers, have you considered freezing your eggs? If you’ve already had them frozen, was your experience similar to Auntie M.’s?

Interested in writing something similar for Corporette? Check out our guest posting guidelines here! 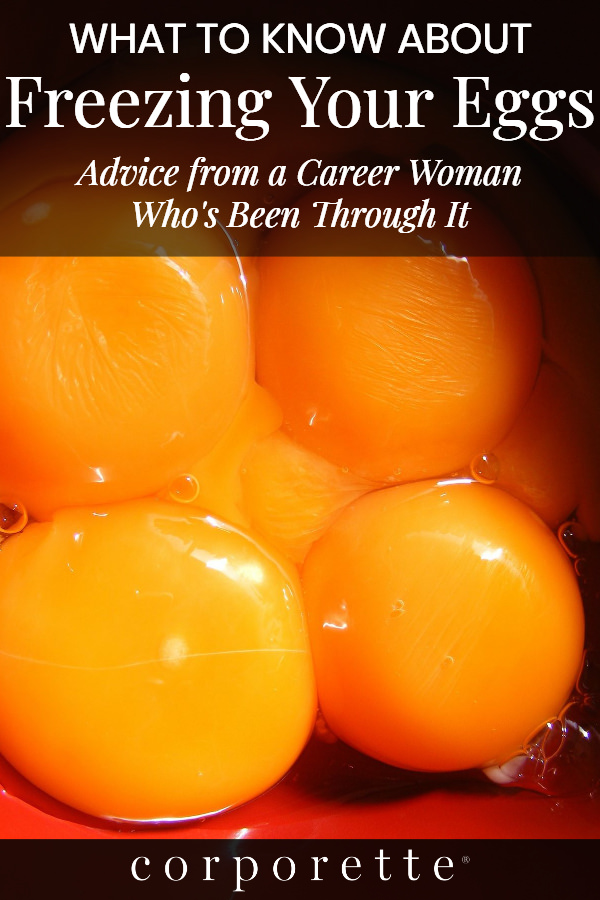