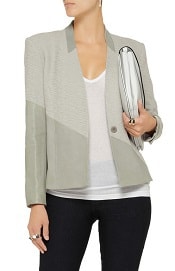 Ooh: love this intriguing little jacket from Helmut Lang, on deep discount at The Outnet. I like the light-green leather details, as well as the light gray jacquard — the phrase “effortless chic” comes to mind, particularly when paired with neutrals, as here.  It was $1,085, but is now marked to $379.75 at The Outnet. Helmut Lang Asymmetric leather-trimmed jacquard jacket

« Weekend Open Thread
The Hunt: Tweed Blazers »
Back to Top