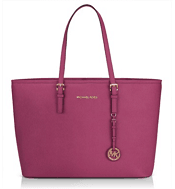 I am always interested when I find a working girl’s cult item that I hadn’t known about before — it seems like the Jet Set tote from Michael Michael Kors might be one of them. A few readers sung their praises on the best interview totes thread, it’s highly rated at all of the stores that carry it, and the bag is so popular that it’s available as a special Macbook tote through the Apple Store (which also has some from Cole Haan and Kenneth Cole) and Michael Kors for $299. The non-laptop version of the bag (dimensions: 14.5″ x 6″ x 10.5″) comes in black, white, brown, and a ton of colors at Nordstrom, Zappos, and Piperlime for $189-$278. Jet Set Travel Tote for MacBook Pro

Readers — are you fans of the Jet Set tote (either as a laptop bag or not)? Which is your favorite laptop tote? Or — do you prefer laptop sleeves?

« How to Respond to Work-Related Praise
Frugal Friday’s TPS Report: Solid wrap dress »
Back to Top